This story got a lot of publicity a few years ago, so some of you may have heard it before. If so, too bad! Read it again. It's worth it.

Calamity Jane was abandoned, shot and left for dead in Texas. A veterinarian had to amputate her leg to save her, and then the news got worse. . .she was expecting a litter of puppies.  Poor Jane just couldn't catch a break.  However, Shar Pauley saw this beautiful three-legged Golden Retriever one day when she had taken her other rescue dogs to the same veterinarian. She felt a soft spot right away for Calamity Jane and decided to foster her as well. 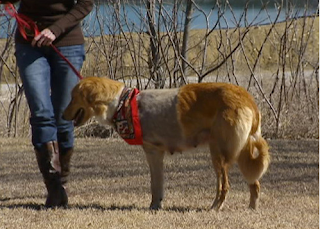 A few weeks after the leg amputation and delivery of the puppies, Shar took her dogs out at the end of the evening to do what dogs do in the yard. Calamity Jane, who up until this point had been a very docile and low-key dog, began barking aggressively and ran off the Pauley property over to the neighbors' house.  Shar had no idea what was going on and was actually mortified at the sudden show of aggression from Jane.  She went over to drag her back when she heard a car door slam. 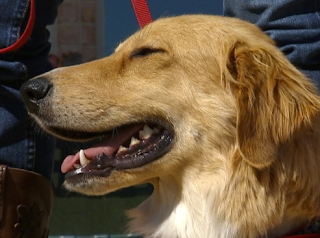 Soon after, the neighbors came to Shar's house to ask for her assistance in calling the police. They had just been held at gunpoint by two men while they were robbed!  When the criminals heard the dog barking they got freaked out and ran off, although they were later caught. 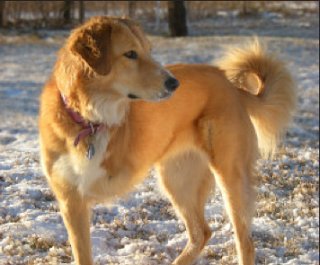 What alerted Calamity Jane to their plight?  It could have been many things, including pheromones, a strange vehicle, or just a heightened sensitivity towards violence, having no doubt suffered some herself.  Shar Pauley said, "From all of my adoption and fostering experiences, I have learned that it is infinitely better to adopt a rescued dog. It has never failed that these grateful souls know it and give their new family endless gifts in return for ending their suffering.”

Wow. I can't say it any better than that, and I won't even try.


I hope you enjoyed the heroics of Calamity Jane, and I also hope you're ready for BOWL weekend. The Puppy Bowl airs this weekend and Wiley and I have been getting ready all week. I can't wait to share some pictures with you on Sunday.  In the meantime, inspired by our response to Animals Behaving Badly, we want to do another photo request: SPOILED PETS. We want a picture or pictures of your pet being pampered or spoiled. Please share!  And don't forget we are waiting to hear your rescue stories.

Posted by Bibliophile at 6:06 AM