Tail to the Chief! 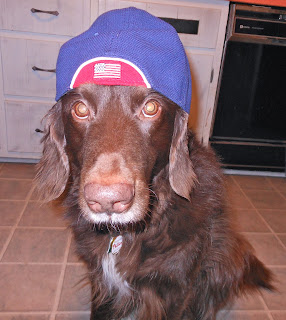 In honor of the Inauguration, Wiley and I decided to take a look at the Presidential pets. Now, rest assured, I am not going to get political here.  You are not reading this blog for my political viewpoints, so let's get to it. Wiley is feeling patriotic. In fact, he insisted on wearing his dad's USA National Olympic team hat. 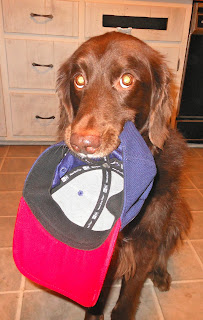 Anyway, let's begin with the classically named Fido.  He was Abraham Lincoln's mutt.  Lincoln was an animal lover. Anecdotal sources say he liked cats best, but his children had all kinds of animals in the White House, including two goats that answered to their names and slept in bed with his son Tad. 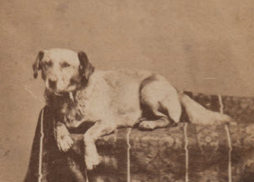 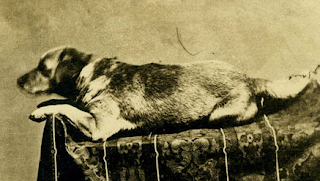 Actually we can go all the way back to George Washington if we want to find an animal lover.  He loved his horse, Nelson.  He also bred his own dogs, creating the breed the American Foxhound, and had a number of other pets including a lemur!  They didn't live in the White House as it was under construction at the time. 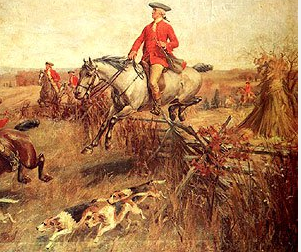 There were plenty of other pet lovers in the Oval Office. Benjamin Harrison had quite a few different pets, including a dog named Dash and a goat named Old Whiskers. 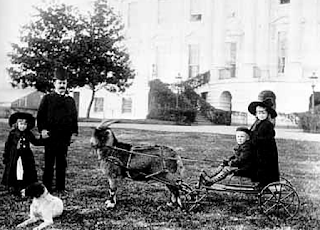 Teddy Roosevelt was famously conservation-minded, and his animal menagerie underscored his love for nature.  Among his pets were a bear, a pig, a hyena, guinea pigs, rabbits, a barn owl, a pony, and many dogs. 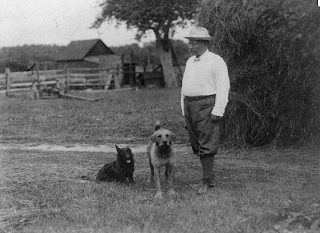 His distant cousin, Franklin, was also very well known for his devotion to his dog.  Fala is, in fact, forever memorialized with him. 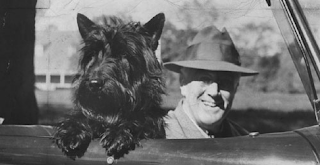 This is the Roosevelt Memorial in Washington, D.C. 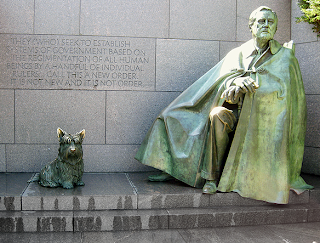 The Kennedys were dog lovers who actually had a side yard built near the West Wing for their dogs to play.  Ted Kennedy, though not an occupant of the White House, was a dog-lover as well, and his Portuguese Water Dogs made frequent trips to Capitol Hill. In fact, Senator Kennedy gave the Obamas their dog Bo. 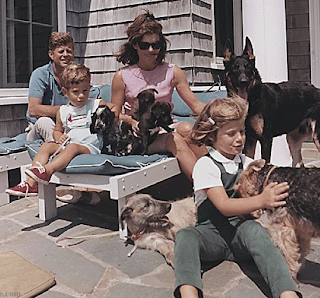 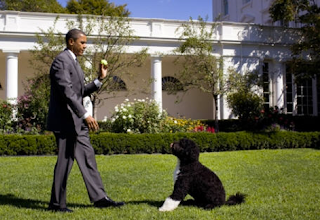 Barack and Michelle promised their daughters they could get a dog after the campaign was over. Imagine that: a politician keeping a promise!

Calvin Coolidge, famous for being silent and curmudgeonly (whether deserved or not) had quite an unusual assortment of animals at the White House. Not only did the Coolidges have two dogs, but their pets also included a bobcat, a raccoon,  and a donkey!

In more recent presidential history, Richard Nixon gave a famous speech in which he referred to his dog Checkers in 1952 when he was a candidate for Vice-President. Checkers never made it to the White House, but Nixon did have several dogs who lived with him during his presidency.

He also had these beagles, Him and Her. He took a lot of flack for grabbing Her's ears this way. 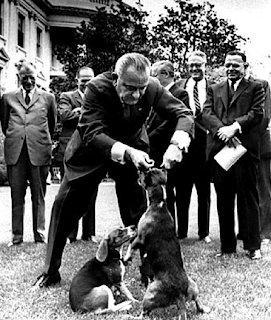 Gerald Ford had Liberty, a great name for a Presidential dog! 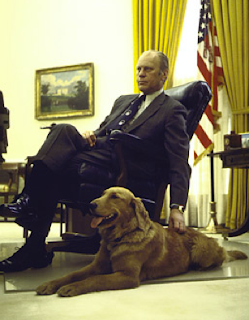 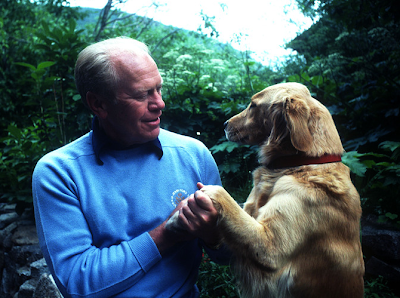 Ronald Reagan and his wife Nancy had many pets as well. They had Lucky, who was a gift from the March of Dimes. She eventually had to be transferred to their ranch as she got a bit too large and was a bit too naughty for the White House. 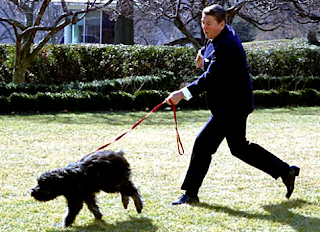 They also had Rex, a Cavalier King Charles Spaniel, a Golden Retriever named Victory, and various other pets during his two terms. 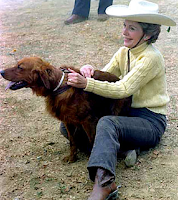 During my lifetime, the most famous presidential dog had to be Millie. 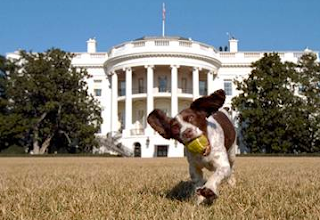 She was an English Springer Spaniel who lived in the White House with George H.W. Bush and his wife Barbara. She had a litter of puppies, too, one of which became another First Dog when George W. took office. 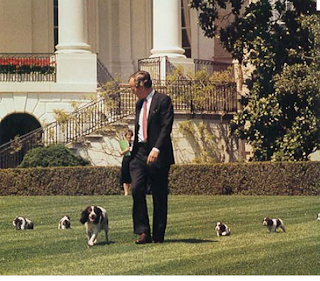 Millie really vaulted to stardom when she released her book, which actually outsold her master's biography. 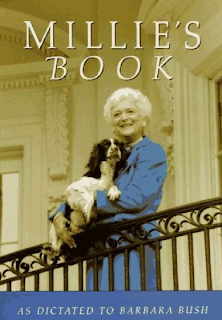 Bill and Hillary Clinton famously had Socks, a cat, and during his second term they got Buddy. 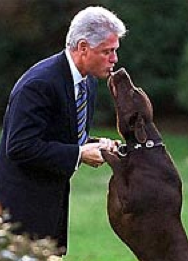 After that there was a Bush back in office, George W., with his wife Laura. With them was Spot, the offspring of Millie, and also Barney, a Scottish Terrier who acquired quite a following of his own.

Barney even had a "Barney Cam" in the White House, which staff members used to make movies about him. 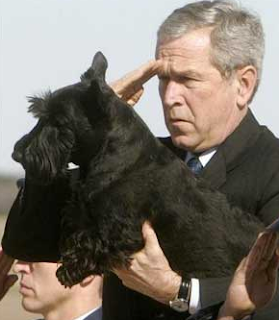 I've mentioned some of the more famous presidential pets, but I would be remiss if I didn't bring up Laddie Boy. 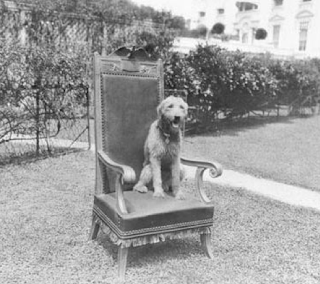 He was an Airedale Terrier belonging to Warren G. Harding who achieved real celebrity status during his presidency.  Harding had a hard-carved chair for Laddie Boy to sit in during cabinet meetings! 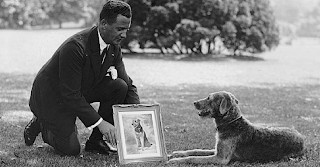 The White House held birthday parties for him, and newspapers published "interviews" with him. He was the first First Dog to get regular press attention.  Here he is hosting the Easter Egg hunt on the White House lawn! 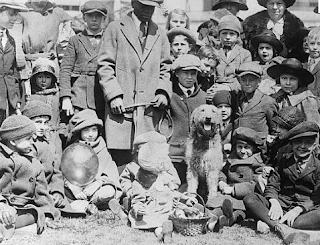 It's so easy to forget that the presidents are human, and like so many other humans, they enjoy and probably even need a wagging tail to come home to. They never have to wonder if they can trust their dogs, or if their dogs are only being nice to them because they are famous.  I would think their pets would also keep them well-grounded. As Woodrow Wilson said, "If a dog will not come to you after having looked you in the face, you should go home and examine your conscience.” 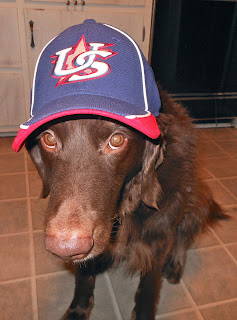 Mine's pretty good!  How about yours?


I haven't covered nearly all the pets who resided in the White House. Many of the men pictured above had other pets I didn't mention, and of course there were many people I didn't even get to. In fact, there is actually a Presidential Pet Museum! 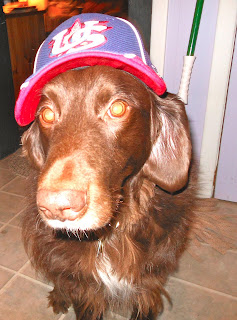 Thanks for joining us today.  Wiley says "God Bless America."  Now, don't forget we need your rescue stories!  We are also looking for pictures of any of your pets misbehaving.  If you like the blog, please share with me so I can share with everyone.

Posted by Bibliophile at 6:05 AM