Today’s post is a heartfelt and sincere thanks to our American veterans.  I need to share this incredible man and his journey with Post Traumatic Stress Disorder. 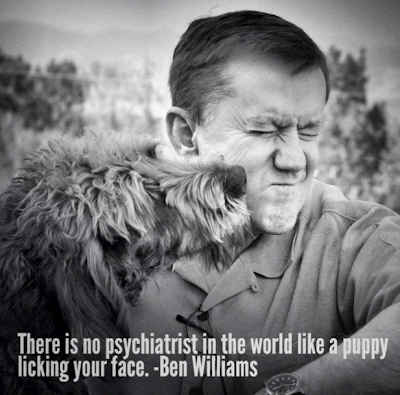 This is Lon Hodge, and his “battle buddy” is Gander. Their hearts and souls are forever linked due to Gander’s role as a service dog for Lon. 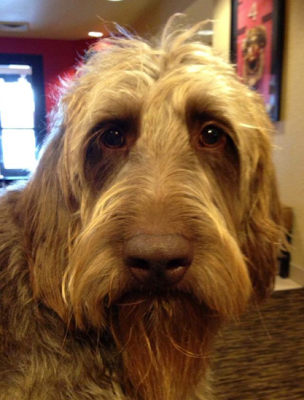 Lon served in the Vietnam War, working in the medical field.  His life was mired in the horrible and gruesome injuries the soldiers sustained.  When he returned from the war, he not surprisingly had frequent nightmares. However, about ten years ago his mental health took a turn for the worse when the nightmares increased in their impact and he also began having daily panic attacks, some of which lasted up to 25 minutes. 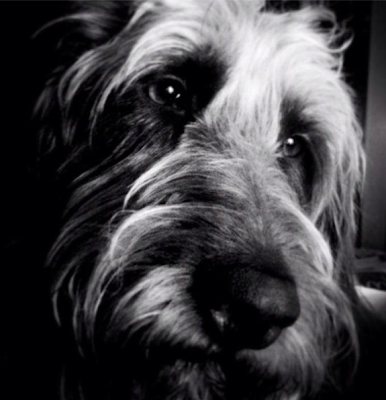 When the panic attacks began he was diagnosed with PTSD, and continued to battle his mental demons.  Life got even worse two years ago when he developed an autoimmune disease that caused severe arthritis. He hit rock bottom, becoming dependent on his pain meds. He could not leave the house for any reason, not even to see a doctor. At that point the doctors at the Veterans’ Affairs hospitals suggested a Service Dog. 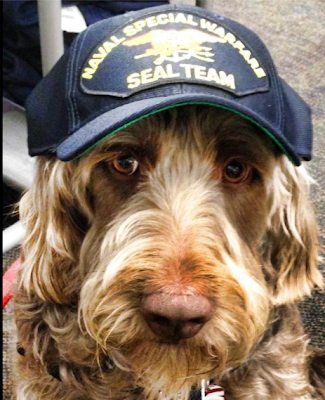 Gander was a death row dog in Colorado who was chosen for a program in which prisoners help train dogs to become service dogs.  Freedom Service Dogs was then able to provide Gander for Lon. 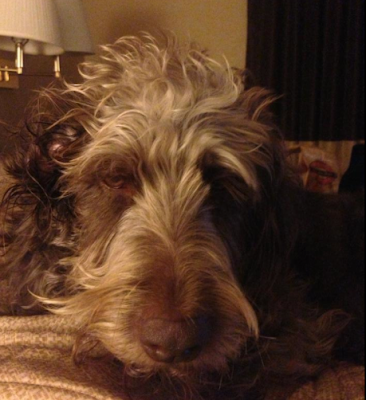 Since being paired with Gander, Lon’s mental health has improved considerably.  He seldom has panic attacks, and when he feels one approaching and his anxiety and heart rate rise, Gander puts his paws on Lon’s chest and snuggles in. Lon’s resting heart rate has dropped 30 BEATS PER MINUTE! 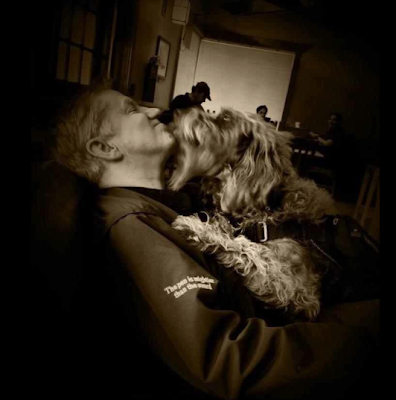 I know Lon would want this post to be all about Gander. He takes Gander to the VA hospital and lets him not just socialize but also “work.”  In fact Gander’s sense of empathy is beyond most humans, and he will actually approach people, even if they aren’t showing him any interest, when he senses they need his support. 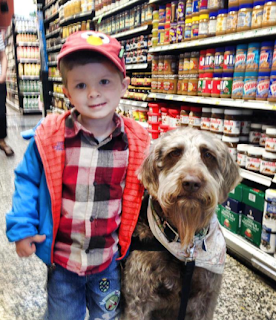 Many times these people will then wind up opening up to Lon about a current crisis, which is what Gander can sense. 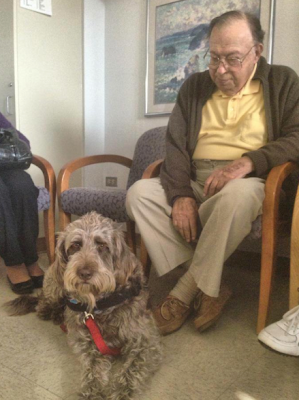 Lon, being the best friend any dog could ever ask for, makes sure that Gander gets plenty of down time, where he gets a break from sharing others’ burdens and just gets to be a dog. 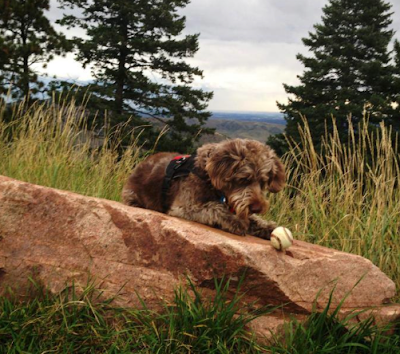 I’m writing about Lon and Gander for so many reasons today. For one thing, I want to encourage you to donate to Freedom Service Dogs, which is a non-profit and amazing organization. You can click here to read about them, but you should know that no dog they rescue ever goes back to a shelter. If the dog doesn’t work out as a service dog they keep it until it’s adopted.  They do not breed any dogs. 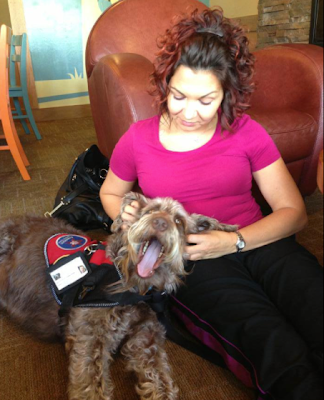 I also want you to check out Lon’s various social media sites.  He posts uplifting pictures and quotes, and best of all he gives us great updates on Gander’s outreach and his own progress. All of the pictures on this site are from his Facebook page, and clicking on any one of them will take you back to their original source. 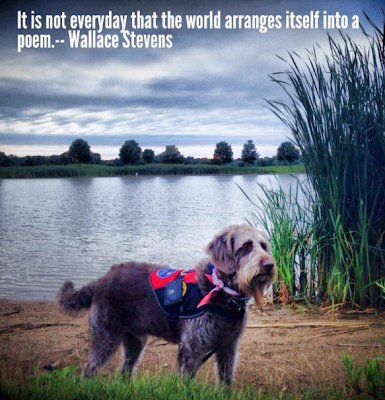 Click on any of the words below to go to the links.

He has also put together a book, with all proceeds going to charities that support trauma recovery and other military causes.  You can see more about the book here.

Mainly with this post I want to call attention to mental health, specifically that of our military and their families. Currently the VA has stopped providing service dogs to veterans until their efficacy can be researched. Readers, you wouldn’t be reading this blog if you didn’t know the effectiveness of animals on our mental health. 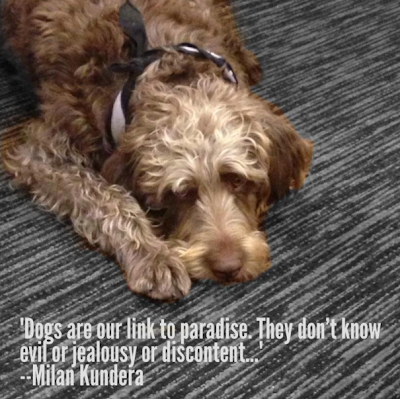 Lon is doing the most important job he can for his fellow vets; he is calling desperately needed attention to PTSD. Lon, with Gander, is proving that there are many effective ways of dealing with mental illness, so no one ever has to feel like he or she can’t fight and conquer their own brain when it turns against them. 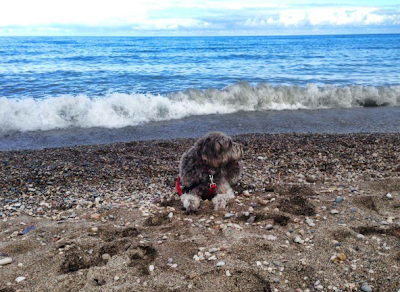 I’ve discussed dogs and veterans before, way back when I started blogging. You can see this dog here, who stopped a suicide in progress.  I’ve discussed my own mental health and Wiley’s role in helping me.

I am so grateful for Lon and Gander, who together share their journey of being battle buddies, as Lon says. 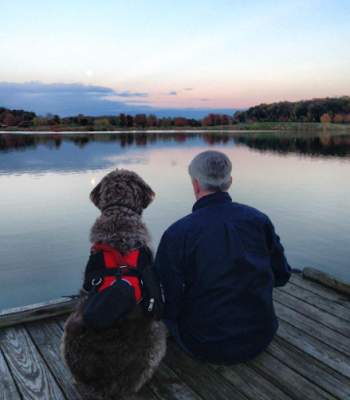 I'm including a few other links here for anyone who is interested in or needs the following information.

Please remember to thank our veterans and current military personnel, and remember that their sacrifice doesn't end when they are discharged.  Oh, and don't forgot: GANDER WAS A THROWAWAY SHELTER DOG. 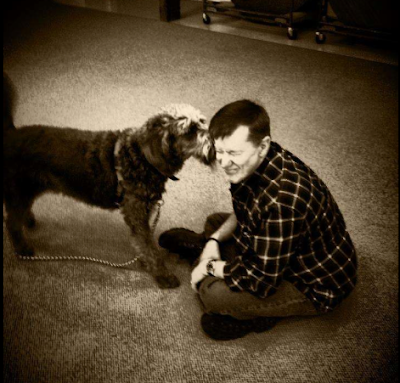 The information in this post comes from the links above and these two sources as well:
http://pets.chieftain.com/2013/06/13/american-hero-pueblo-natives-service-dog-in-running-for-national-award/

Posted by Bibliophile at 2:56 PM